The store will not work correctly in the case when cookies are disabled.
Menu
Account
Settings
Currency
USD - US Dollar

The human mind is arguably the most powerful and most important sexual organ. It’s what registers what looks good to us, what feels good to us, and what sounds good to us. The body might be the main actor, but the critical reception is entirely up to the mind.

Fantasy is fun, but if you’ve ever wanted to explore your fantasy in real life, role play might be just the thing for you. Our friends at Kinkly define role-playing as

“the act of changing one’s behavior, and possible clothing, to assume the role of a different person. Role-playing during sex is used to fulfill fantasies.”

It’s essentially acting for an audience of just you and your partner. It can be as simple or elaborate as you want. Some incorporate fake names and personas, costumes, props, and even a change of scenery. You pick a fantasy and let yourself step into the roles to experience it for yourself.

Role-playing is also a great way to keep things lively between you and your partner. Having a partner is fun for a bunch of reasons, but one drawback is that familiarity and routine might land you in a rut. It’s still very much about you and your partner, but it also incorporates an element of the exotic. It’s not just you and your partner—you’re also the Phantom and Christine, or Batman and Catwoman, or whatever floats your boat. It doesn’t have to make sense to anyone except for you. It’s just supposed to be fun.

In this post, we’ll go over how to introduce role-playing into your routine, give our best tips, and suggest some scenarios and how to get started. 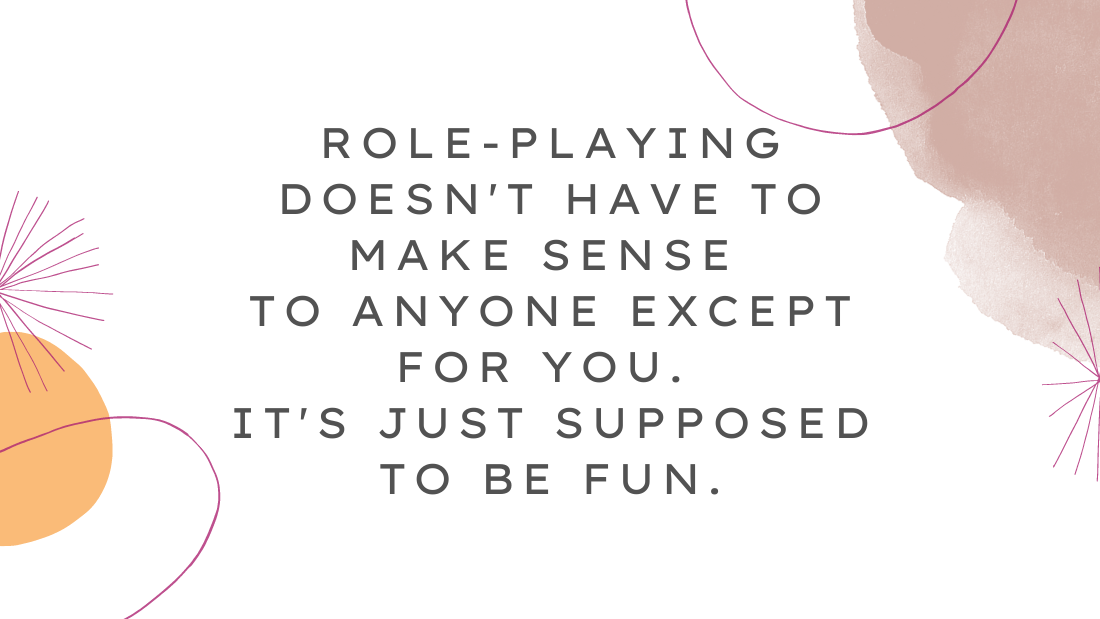 You don’t have to be elaborate, but you do have to be upfront about what you want. You’ve both got to be on the same page if you want to enjoy it. Tell them what you like, what sounds interesting, and what your hard and soft limits are. Likewise, you want to be aware of your partner’s feelings and what is and isn’t on the table for them.

You can try broaching the subject with a segue, like showing your partner a sexy costume and asking how they’d feel about you wearing something like that. But when you bring this up, you need to guide the conversation toward trying role play.

There’s also nothing wrong with just saying that you want to try role play. But when you bring it up, pick a time your partner is willing and able to have the discussion.

Just because a school teacher/student scenario sounds fun to you doesn’t necessarily mean your partner will be on board with that particular scenario. Honesty is always the best policy, as is respecting their boundaries.

And if your partner wants to try role play, that’s probably not their way of saying they’re bored with you. It’s something that sounds appealing to them that they want to try with you. It’s not easy for everyone to talk about their sexual fantasies, even with their partner. Even if you’re not into it, try to be understanding of your partner’s needs and wants. They feel comfortable enough with you to share intimate details of your sexuality and that’s a big deal for long-term relationships.

Editor’s Note: Consent is vital to all aspects of sexual activities. Just because a partner may agree to a fantasy, does not mean they will agree to every aspect of the fantasy. A great idea for discussing fantasies and role-playing is to utilize a “Yes, No, Maybe” list. A couple of our favorites come from Autostraddle, an LGBTQ+ resource, and Doctor of Human Sexuality, Dr. Emily Morse, also known as Sex with Emily. We will talk more about “Yes, No, Maybe” lists in a later blog.

A word of advice from the theatre: good actors don’t break character. It’s totally fine if you feel a little silly or self-conscious at first, but we promise that you and your partner will have more fun if you take the fantasy seriously. You want to avoid breaking the suspension of disbelief. Commit to your role.

Making your fantasy “real” can be done a number of ways. Some people like to dress up, and some just like to establish a premise and improvise the rest. If a costume or special clothes help you get in touch with the fantasy, incorporate some. But if it detracts from your enjoyment, no worries. You and your partner can customize the execution.

Operate within your skill and comfort level.

One of the best ways to ensure everyone has fun is to go over the particular details of your fantasy before you ever attempt it. Spontaneity is fine, but be clear on what beats you’re trying to hit. If you want to be restrained, tell your partner beforehand. If you do not want to be restrained and gagged, tell your partner beforehand. They can’t read your mind, and having a loose script to follow takes the guesswork out of your fantasy so you can focus on execution and enjoyment.

Speaking of your partner’s mind: participating in a fantasy is a great way to get inside their head. It gives you a glimpse of what kinds of things appeal to them and what they enjoy. You can take these revelations out of the fantasy and find ways to incorporate them into other aspects of your relationship.

But a note about you and your partner’s fantasies: they’re just that. They are fantasy. Just because it's something you fantasize about does not mean that it’s something you’d want to happen in real life or that you personally condone. It’s just about having fun and exploring fictional scenarios in a safe space. 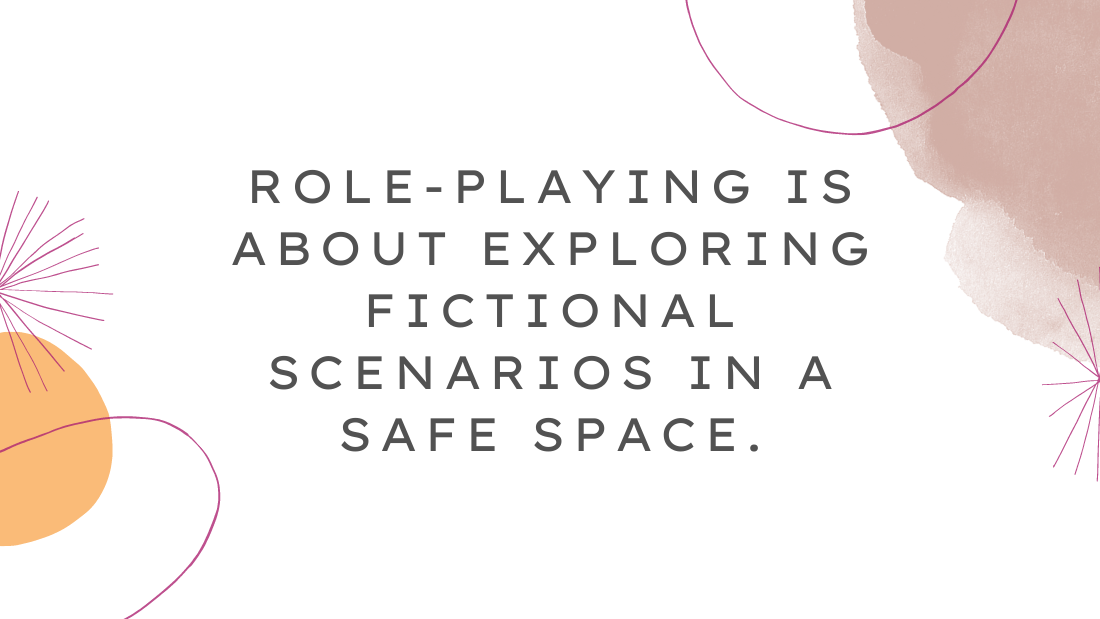 It’s also fun to just step into a different part of yourself instead of stepping into a character. Letting a repressed aspect of your personality take the lead for the night can be fun and empowering. It allows you and your partner to experience a different side of each other. If you’re shy, it could be fun to be bold and the instigator for the night. If you’re usually the instigator, taking a night off to be the more passive party can be a breath of fresh air for your relationship, and just for you.

Alternative personas also make great role play premises. You don’t have to be anyone in particular, just someone different. Sometimes it's fun to pretend you’re someone else, or that you’re having sex with someone else. It’s still you and your partner, but different.

Some fantasies might be shared by a bunch of people, but fantasy is specific to you. You’re more than welcome to recreate a book or movie or historical figure you’ve always really loved. Or if you just want to put on a wig or fake mustache and go by a fake name for the night, have at it. There’s really no wrong way to role-play. It’s a choose-your-own-adventure kind of deal. 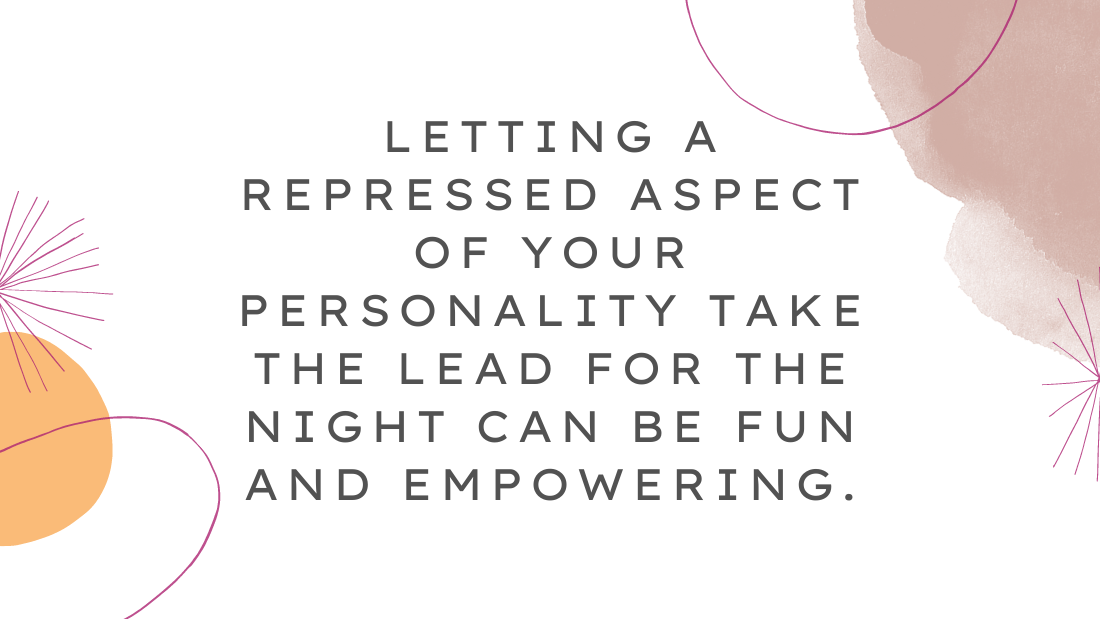